While similar in some respects to each other, there are key differences to be noted between the two recreational vehicles of the desert – the Dune Buggy and the Sand Rail. Often thought to be one and the same, Here are Some Key differences Between the Two:

Dune Buggies are recreational vehicles that are used on beaches or sand dunes. Dune buggies are designed to deliver either more engine power, or a lighter frame, or even both in some cases, with an aim to increase the power-to-weight ratio. While dune buggies usually have an open chassis and large, wide tires, they are often modified from an existing vehicle. The older Volkswagen Bug is a popular choice because it has a rear-mounted engine and a robust front suspension, suited to the specifications required. 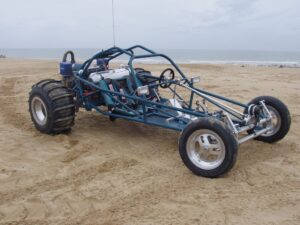 Sand Rails, on the other hand, aren’t modified from existing vehicles, being built instead from a tubular, open-frame chassis that have an incorporated roll cage and “rails”, which lends to its name. You typically won’t find windows, doors, or even body panels on Sand Rails, and they almost always have rear-wheel drive, as opposed to the full-bodied nature of the dune buggy.
When it comes to steep sand dunes, most off-road vehicles, being top-heavy, would sink into the sand and get stuck. Sand Rails being lightweight in nature and have what is known as paddle tires, which allow them to skim over the surface of the sand without getting stuck. Owing to its low center of gravity and a mid-engine configuration which offer it balanced weight distribution and traction, Sand Rails can also make tight turns and can climb dunes with ease. 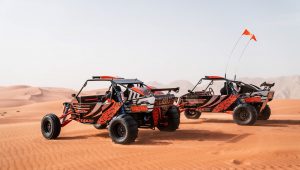 At Explorer Tours, our Desert Fox sand rails are built specifically for the sand dunes in the UAE, coming equipped with rear-wheel drive and tires designed for operation in sandy terrain. As an alternative to the dune buggy in Dubai, our engineers have designed the Desert Fox so that the suspension, air filters the engine used is optimized for sandy terrain and deliver high-performance every time.

With all these extra modifications specifically meant for sand driving, Sand Rails perform better on the large dunes of the UAE than dune buggies do, and are relatively easier for amateur drivers to navigate.

Interested to Book Tours With Us? Dune Buggy Dubai